On Etsy that is! It's taken me many tedious hours but I have finally gotten all (ok, most) of my items measured, photographed and posted in my Etsy shop.
You can get to my shop either with this link or from the sidebar on my blog. Please feel free to pass the link along to anyone you think might be interested!
Since I'm still fairly new at this I'd love to hear any feedback you have for me. Thanks for looking!
Posted by Leigh at 1:27 PM No comments:

Question of the Day...In Good Times and Bad

My hubby Tim and I have been together since 1994, which basically means half my life! We got married in 1997, I was young but knew he was "the one".
Through the years we have been through a lot of ups and downs. As many couples do, we have been through a good deal of stressful situations together. The birth of two children, a stressful move and the diagnosis of a chronic illness in our young daughter.
This has understandably put a lot of stress on our marriage because life happens and priorities shift. As a mom, it can be difficult to go from mom mode to wife mode. As a married couple, when life changes and you grow older you either grow together or you grow apart.
There are some times in our lives when we realize what we have and what we take for granted. My husband and my marriage means everything to me and I'm not the kind of person to give up easily when things get rough. Marriage takes work. A lot of work.
My husband and I try to recognize that our marriage needs to be nurtured along with our children. We try to find time (even if only a few minutes) each day to talk and connect. We try to have regular date nights and get-a-ways as often as we can. But in reality, it's not always easy.
So my question is, with all the stresses of daily life, what do you and your spouse do to maintain marital happiness?? I would love for you to post a comment with your answer to this question!
Posted by Leigh at 7:55 PM 5 comments: 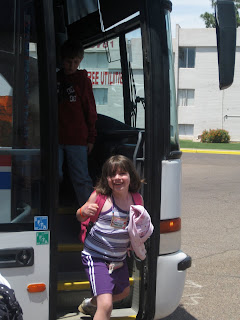 After a looooong week (for me), my baby made it home safe and sound from Diabetes Camp.
Having her gone was so much more difficult than I imagined it would be. Logically I knew she was fine and was probably having a blast, but without being able to talk to her I just didn't have the reassurance I needed, despite talking to her counselor on the phone last Sunday night.
All week I tried to keep myself busy and focus on the excitement of her coming home.
Today her bus was scheduled to arrive at 1:00. As if the anticipation of seeing her wasn't bad enough....the bus was about 30 minutes LATE! UGH! But when it arrived I could see her through the window with a giant smile on her face, waving excitedly. It was amazing!
Once we got home, I decided to take Janelle out to spend some alone time with her. I got to hear so many stories! She went horseback riding, rock climbing, swimming, canoeing, fishing, and hunting for dinosaur eggs! She even met a very "handsome" and "polite" boy and gulp....went on a "pretend" date with him! She also danced with him at the dance on their last night.
I can't believe how grown up my little girl seems all of a sudden! She had an amazing time and seems to have enjoyed every minute of it. She now has some incredible memories and can't wait to go again next year!
Posted by Leigh at 5:51 PM 4 comments: 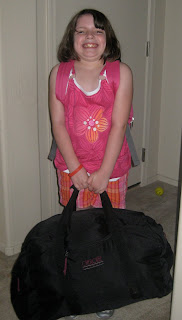 Today is the day we have been talking about, thinking about, and looking forward to since February, when we registered Janelle for Diabetes Camp. My daughter could not have been more excited to go!
Janelle is a very smart, independent, confident, self-assured little girl. These characteristics make going away from home for a week a welcome idea for her.
I am so happy and grateful that she gets to have this wonderful, amazing experience but I can honestly say that I don't know how I am going to get through this week without her! I miss her SO much already. Not being able to talk to her makes it harder. Being here without her is just weird and not something I think I like! 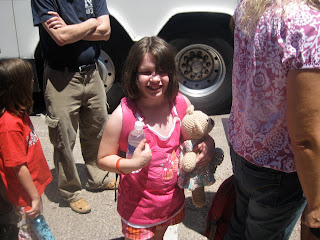 Waiting in line to get on the bus. 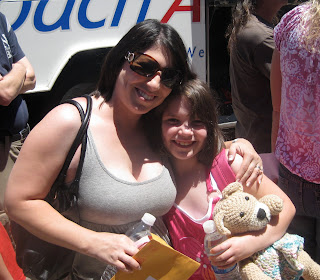 Getting ready to board the bus 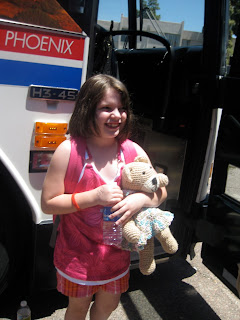 I am a BIG fan of Etsy. Probably more for buying than selling. The pattern for Ted E. Bear came from one of my favorite Etsy sellers. Her patterns are so well written, easy to follow and so cute! 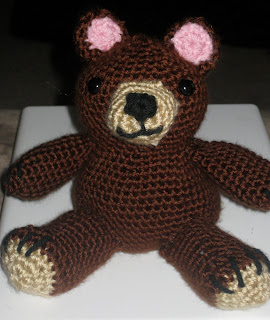 The pattern for this blanket came from a book called 200 Crochet Blocks by Jan Eaton. It was not hard but did take some counting and concentration which meant my family being ignored for a bit. 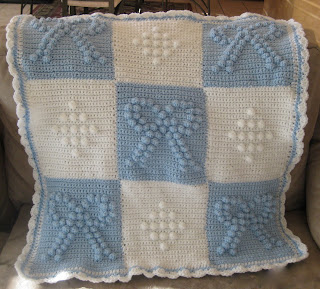 Sorry my pictures are so awful. I am a terrible photographer!
Posted by Leigh at 8:03 PM 1 comment:

My pile of finished blankets is starting to build again, which means a trip to Phoenix Children's Hospital is in the eminent future. But first, I thought I'd post pictures of them. This isn't all of them, just some of the better ones
;-).
Rainbow Teddy Bear 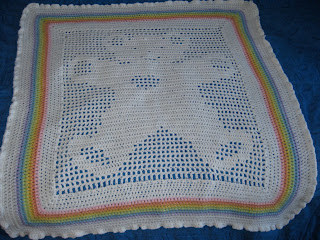 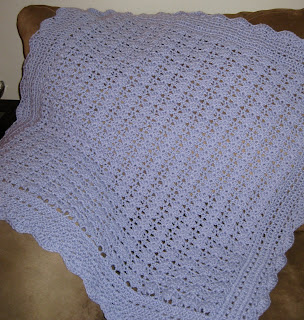 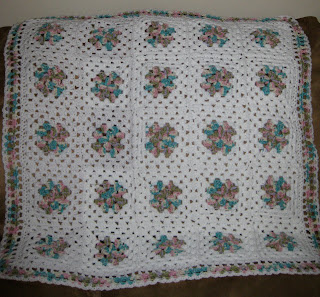 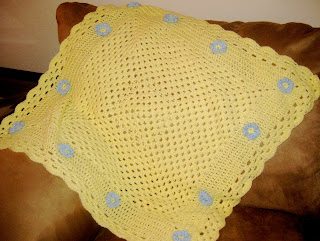 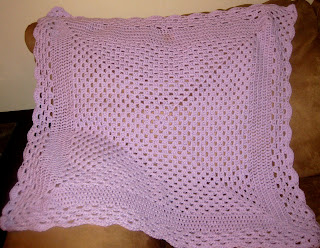 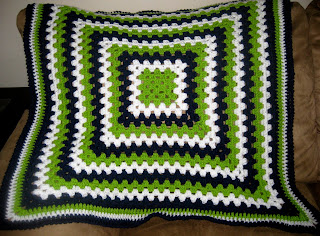 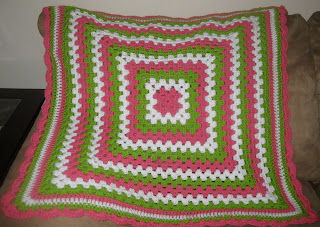 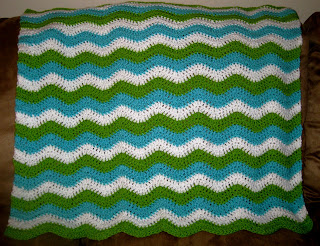 As a kid we always had pets. Usually more than one at a time. We had cats, dogs, fish, mice, gerbils, even sea monkeys.
My hubby has never been an animal person but has always gone along with whatever pet I brought home.
Our first pet was a parakeet. It didn't take me long to realize that was a mistake. There were so many times when I thought for sure I'd set it free off our apartment balcony if it didn't stop squawking. And cleaning up after it was no picnic either. Naturally that thing lived to be as old as it possibly could. I remember the day I came home from work and it was upside down in the cage. On the outside I was sad, on the inside I was celebrating.
We got a cat in 1998. She was my first baby. Yep, I was one of those people who had framed pictures of their cat all over the house. She has lived through two children and two moves. She's now 12 years old and is still going strong.
Those who know me or are my Facebook friend know that through the years we have had a lot of pets and that I can be quite impulsive when it comes to adding pets to our family.
Last May we got four guinea pigs. Yes, I said four. Why four? Well because they are social animals and do better with a buddy. So we started with two boys, then while at the pet store fell in love with a female and then realized she would need a friend.....long story short, big mistake. If you ever think you may want guinea pigs let me know and I'll talk you out of it. They're great pets, especially for kids but they are MESSY and STINKY!
I never really considered getting a dog because I just knew I was never up to the amount of work they would create for me. Plus, we had the cat, I didn't know what to expect with the kids, blah, blah, blah. So it was almost a surprise to myself when one day I decided I wanted a dog.
I remember when my best friend as a kid got a puppy. It was a Bichon Frise and was just like a little white ball of fluffiness. I remember it being such a great little dog and knew that if I ever got a dog that would be one of my top choices.
So I did some research and looked at a couple breeders and before I knew it we were visiting puppies! I knew that I had to be pretty sure before going to see them. Turns out that the breeder I chose would not sell a puppy by itself to a family who was away all day (like ours). So we decided if we were getting a dog we'd be getting two. It made sense. It wouldn't be right to leave a puppy alone all day with no one. So we made the decision and the next day went to pick up our boys! They were two eight week old Bichon Frise puppies who we named Jackson and O'Malley.
They are such great puppies! They are so sweet, great with potty training, super smart and just wonderful, perfect dogs. They are now almost 4 months old and I think I love them more every day! 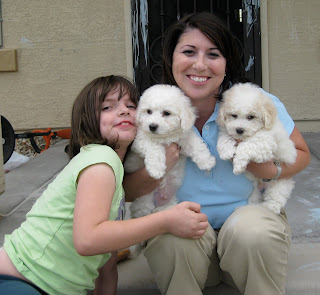 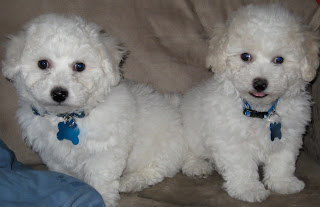 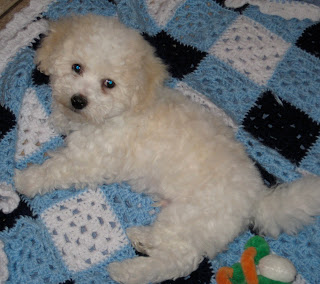 We LOVE to cuddle together! 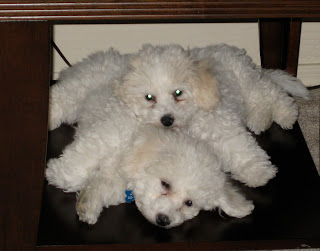 The Boys after their first trip to the groomer! So handsome! 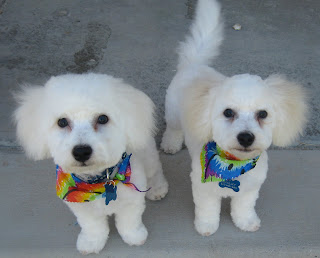 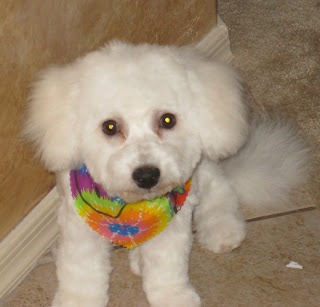