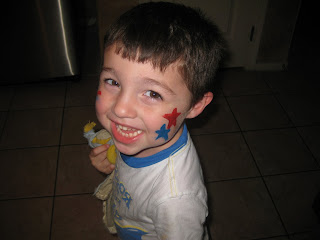 Our 4th of July began with a trip to the emergency room.  Last night, Evan ran to the door like he always does when Daddy comes home.  However, there was a toy on the floor (nothing new) that he either stepped on or tripped over and he hurt his foot.  He started to scream and cry and seemed to be in a lot of pain.  He cried for much longer than he usually does when he falls or hurts himself.
For the rest of the night Evan refused to stand on his foot or walk on it.  This morning he continued to do the same.  Since I don't own an xray machine (who does?) I decided to take him in....just to be sure.
Luckily the xray showed no broken bones so we were sent home and told to watch it.  He's still got a slight limp, but at least I don't have to worry that there may be more going on.
I have to say that being at the ER was way different with him.  Usually it's Janelle I am taking!  It was a lot less nerve wracking with him for some reason.  Oh, I know.  Because he doesn't have diabetes!
After our excitement this morning it was back home for a few hours and then off to my sister's house for a bbq.  By the way, my sister makes some darn good ribs!  The kids love to play with their cousins.  There are currently five cousins and one more to be making her appearance soon!
Today could not pass by without thinking about my dad and my grandma who happen to have their birthdays on the 4th of July! Happy Birthday Dad and Grandma!  I love you and miss you both!