"The First 100 Years Are the Hardest"

This is a quote from my grandma, passed down from her mother.  They are smart women who know what raising kids is really about!

Having two children of my own has definitely not been easy!  They each have their own set of challenges.  I know that all children have their own challenges or their own "thing", however I can't help but feel like I have been given a little more than most people.  Not that I would change anything, but some days these challenges are exhausting.

On February 28, 2005 Janelle was diagnosed with Type 1 Diabetes.  This means that her pancreas no longer makes insulin.  A couple weeks prior to her diagnosis we began to notice symptoms.  Excessive thirst and urination, being tired and irritable, weight loss.  Very classic symptoms.  The pediatrician confirmed my suspicion and sent us straight to Phoenix Children's Hospital where we spent the next three days.  Tim and I were given a crash course in diabetes management and sent home to begin our "new life".  That is one experience that has changed me forever.

Four years later diabetes is still a challenge.  Of course we are used to it now and it's part of daily life.  But it's a daily challenge none the less. 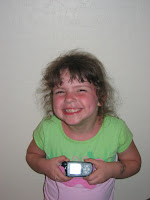 Evan came into this world a screamer and a clinger and has never changed!  Evan's challenges are sometimes as difficult (or more) than dealing with diabetes.  He has a speech delay, which we are working on overcoming.  In addition, he has been diagnosed with Autism, OCD and anxiety.  By different doctors.  Following his Autism diagnosis by a developmental pediatrician, I had him evaluated by a pediatric neurologist, pediatric psychologist and a pediatric psychiatrist.  Trying to get to the bottom of Evan's "issues".  It was a long road and without a final "diagnosis".  Does he have some signs and symptoms of Autism?  Yes.  But any kid could, I guess.  Does he have some signs of OCD?  Absolutely.  But that's in his genes for sure.  Evan is Evan.  Not easy to live with, but he's ours, he was given to us for a reason and we love him none the less!  My hope for Evan is that one day he will get past his speech delays and that we will be able to provide him whatever support he needs to be as happy as he can be! 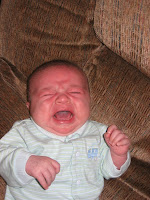